‘There’s a body in there’

I had Tyler by half a football field, but he had easily closed the gap by the time I reached the mine’s entrance. What had he seen back there? What motivated him to sprint over rock-strewn rail tracks in total darkness?

‘What did you see?’ I huffed once outside.

‘This is horrible, Clint.’

He was white with terror. 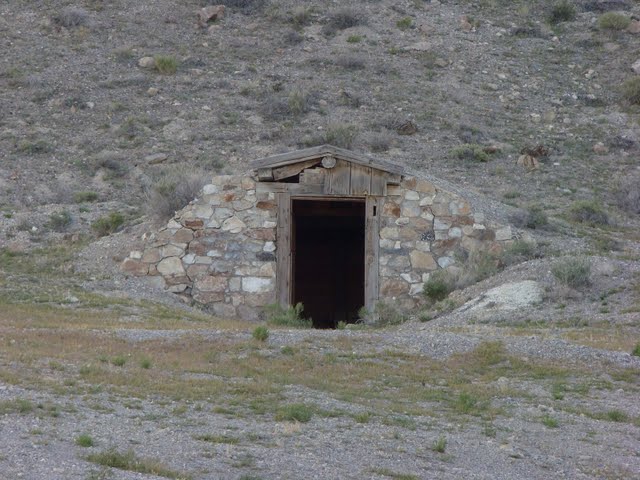 This mine is one of many abandoned mines that remain in remote corners of Western Utah. This one is similar to the mine I discuss in this true story.

The preceding story is an adaptation of an article I wrote last October for the Tooele Transcript Bulletin, and is first in this year’s Halloweentime series here at BonnevilleMariner.com.

I nervously balanced on a rail track that ran from the tunnel’s entrance and past me into the darkness. The adit had curved enough over the distance that only a few dusty rays of light were still visible from its mouth. I checked my watch, as if I had any way to gauge the minutes — as if I had even bothered to note the time when we entered the abandoned mine.

Only one thing was certain: Tyler should have been back by now.

I’ve always wanted my own scary story — one fit for Halloween and the spookiest campfires. For years, I had listened to my inordinately danger-prone aunts spin horrifying yarns at our annual family camp out. Each year I would sit petrified by the fire as Sandra recalled a threatening phone call she received while she was baby-sitting in a house at the end of a long, dark street, and about being stranded in the mountains and stalked by a group of drunken men.

Aunt Kim would follow suit with her story of discovering something that looked a lot like a shallow grave near her campsite, which curiously coincided with a blanket going missing from her tent and news sightings of an infamous serial killer. None of this could be verified, of course.

Still, my young siblings and I were always terrified to walk back to our tents after the embers cooled.

Aside from a few dicey climbs and getting briefly lost once in the Uintas, I never had a scary tale of my own. That thought crossed my mind momentarily in the tunnel — sometime between being anxious and worrying that Tyler was dead. I stood on the tracks looking into the darkness. Panic hadn’t yet set in, but it was close.

It happened years ago, before we realized that flippantly walking into abandoned mines was an amazingly dumb idea — and at a time when I thought there was a decent chance that my friend Tyler might be insane.

We were somewhere — no need to specify exactly where— in the west desert. The allure of the dark opening on the hillside was just too powerful. We stopped to inspect the exterior, but rushed inside to escape an ambush mosquito attack. We had already walked 20 yards into the mine before we actually made the conscious decision to do so.

The adit, or horizontal shaft, stretched on immeasurably before us, and the path was clear as far as we could see. Neither of us had a flashlight at hand — we hadn’t planned to enter the mine, after all. Except for an ominous musty smell and the fact that several sections of the adit looked to be entirely supported by flimsy wooden braces, the mine seemed safe enough for a quick peek.

I stopped at about 50 yards, just under a wooden portal of sorts. The mine’s spell on me was broken when the tunnel’s curve nearly extinguished the daylight.

I was done, but my resolute friend vowed to continue, and I knew there was nothing I could do to stop him. Tyler was the most determined person I had ever known — often to the point of irrationality and even in the face of potential disaster. I knew he wouldn’t stop until he either reached the end or was crushed by falling rock.

He trudged forward, using his video camera’s viewfinder for light. I watched its red LED as he disappeared ahead of me. It glowed for another minute, then it too was gone. For several long minutes, the tunnel was still and silent.

I paced the rail tracks, becoming anxious, then seriously worried, with fleeting thoughts of Sandra and Kim and the scary story I might be able to tell at next year’s campfire — should we survive.

Tyler was also the most fearless person I had ever known, which is why my heart jumped when I heard him screaming in the distance and saw the camera light reappear and shake as he ran toward me.

“Clint — run! Don’t stop!” I had him by half a football field but he closed the gap by the time I reached the mine’s entrance. We were safe, and I was glad for that. But what had he seen back there? What motivated him to sprint over rock-strewn rail tracks in total darkness?

“What did you see?” I huffed once outside.

“This is horrible, Clint.”

He was white with terror.

I might not have believed him had he not filmed the whole thing.  Tyler took acting and practical jokes to near obsessive levels. But this time his expression was horrifically genuine. There was a body in that tunnel, and now we had to figure out what to do.

He breathlessly described the scene in unusual detail, then rewound the tape and played it for me from the point he left me. Darkness, breathing, and footsteps, continuing to the end, where a panicked Tyler whispered, “Oh my gosh!” and started yelling.

That’s when I finally caught on, and that’s when his voice cracked.

I should have seen it coming from a mile away. I’d witnessed many of his stunts like this– like when he wandered off at  2 am into a ghost town graveyard to scare a friend’s little brother, or when he bit a dead rattlesnake in half to make a couple young guys at camp think he was crazy.

But I was rarely the butt of his pranks. Ironically, Tyler’s stunt had given me the scary story I was looking for, sans tragedy — the kind my kids ask me to tell — “scary but with a happy ending.”

Tyler’s no longer insane, I don’t think. The pranks faded as we got real jobs and started raising families. But I’ll never forget the very real terror I felt as I dashed from that mine, and the delight as my terrified nieces and nephews tensely listen to the story every year.

There’s still one thing I wonder about, though.  Something that dogs me to this day.  Something drove my friend to walk in darkness to the end of a potentially deadly mine shaft.  The dead body thing was a joke, but Tyler never told me what was really at the end of that adit.  And every fall, I start to wonder.

Posted by bonnevillemariner on October 8, 2009 in BUDS, Holiday Related