The following originally appeared in the March 19, 2009 edition of the Tooele Transcript Bulletin. 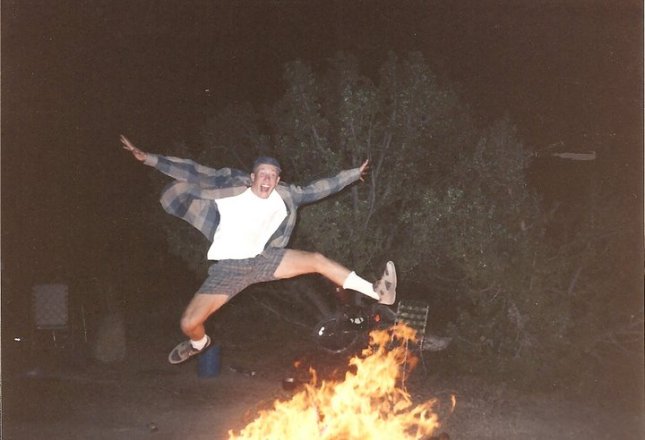 John Orgill leaps over a bonfire in Skull Valley in 1993, while on a four-day adventure with columnist Clint Thomsen. The Horseshoe Knolls Recreation Area in Skull Valley is a place where anyone can feel like a kid again. - photography / Chan Blake

Dog it, Andy!” Dayland screamed, as Andy aimed his Dodge Ram toward another gaping dip in the dirt road. “Dog it!” Andy smiled, locked his hubs, and hit the gas.

No matter. Dayland was just another amusing element in what may have been the seminal exploit of our lives to that point — a four-day west desert safari.

I recalled that trip from 16 years ago as I drove west toward Skull Valley last weekend with my 3-year-old son Coulter. He sat in his car seat eating Swedish Fish and staring inquisitively at the salt swamps and sunken fence posts along I-80. I wondered what thoughts were churning in his head as he nodded off at the Dugway exit.

At 9.5 miles south of the exit, the Horseshoe Knolls Recreation Area isn’t a pretty place by most standards. It’s a barren, hilly area overlaid by a network of well-trod dirt roads and heavily used camp sites. Every father, scoutmaster, and shotgun enthusiast knows about the knolls. Growing up, I must have camped there eight times a year.

But as highly trafficked as the central area is, comparatively few people take time to explore the ridges and castle-like buttes that lie to the east. It was at the base of one of these unnamed ridges that our rag-tag group made camp 16 years ago.

There were 13 of us, give or take. Some of us were buds already. Others, like Dayland, were acquaintances or friends of friends who happened to show up. This wasn’t our first foray into the great western wilderness, but for many of us it was our first extended camping trip sans an adult presence.

That meant four full days of wandering aimlessly through the hills and lounging beside a round-the-clock campfire.

My supplies were scant. I brought a sleeping bag, a machete, a pack of Little Smokies, and a few cans of beef stew. There may have been a tent or two in camp, but most of us laid our sleeping bags out on ground tarps.

Our days involved heroic feats and various rites of passage, each day playing out like a chapter of a Homeric poem. We caught snakes. We swam in Horseshoe Springs. We drove to Wendover for a buffet dinner because, as we reasoned, “It’s so close — aren’t we about halfway there already?” For the record, Wendover is exactly 87.6 miles from our campsite — nearly twice the distance back to our homes in West Valley (a slight miscalculation on our part).

The BLM prefers to call the playa west of Lone Rock “the mud flats.” True, you can’t set land speed records on them, and you won’t cauterize your eye sockets if you look at them without sunglasses. But if you’ve ever played tackle football there, you can’t help but notice the thick salt surface. We scrimmaged one afternoon until we were sufficiently battered. Then we cruised the flats in dune buggies.

The bonfire was the centerpiece of evening activity. Chan and Tyler would log the day’s activities in their journals. John would repeatedly leap over the fire. The rest of us would follow suit. As the evenings wore on, we’d talk about girls we liked and lay out game plans for wooing them.

I remember lying under the stars listening to a U2 cassette on my Walkman. I’d nod off happily after the first song, the lyrics of which captured the spirit of our adventure perfectly:

I happened to have some U2 on my iPod Saturday, which I cranked up as we turned onto the dirt road at Horseshoe Knolls. I worried about mud and clearance, but the roads were surprisingly solid. I drove out toward the ridge and parked before the road got rough. This was the family van, after all, not Andy’s Ram. We’d have to hike the rest of the way.

Coulter woke up when I lifted him out of his seat. “Daddy, what this place is?” he asked, ambling around to get his bearings. The still, warm air smelled of juniper and dirt. The temperature was spring-like — perfect weather for a hike. I helped Coulter up the steep path that led toward my old stomping grounds. “Son, this is where your daddy became a man.”

The campsite looked much the same as it did the last time we were there. It seemed in better shape than in recent years, when it was overrun and littered with glass bottles and shotgun shells. There was our fire ring, the tree John would hang his hammock from, the trail leading to the top of the ridge.

We hiked past odd rock formations and faux caves to the top, where we stopped. Had we more daylight, we could have continued along the ridge and back down toward the mouths of North and South Broons canyons.

Coulter stopped and selected two sizable boulders and handed them to me. “Daddy, you hold these giant rocks.” Like his older brothers, Coulter saves rocks from each trip to remember them by.

By the time our van was back in view, I was carrying the boulders and Coulter along with them. It’s been 16 years since the camp that sealed friendships and fostered a deep love for this desert. I have four children now. I no longer leap through fires or catch snakes, and I tend to over-pack for camping trips. Yet I still feel like a kid when I’m in the desert. Some things never change.

Horsing Around
As much as I respect and admire the elegant creature that is the horse, we’ve had sort of a rocky relationship.  Last weekend I was reintroduced to horseback riding thanks to Janet Hancey of the West Desert Chapter of the Back Country Horsemen of Utah and her 15 year old mustang, Reno.

Our ride along the Oquirrh benches is the subject of this week’s newspaper article, which will print in Thursday’s edition of the Tooele Transcript Bulletin.  I’m limited to 1000 words for these columns, so I didn’t have time to fully explain my falling out with Equus ferus caballus.

Had I more room, I would have told about the time an overly affectionate horse nearly sent me plunging to my bloody death in Pockets Fork, or the time a spooked stud sent my sister to the ER with a nasty concussion.

Pineapple Jerky?
Heck yeah.  The folks at Jerky.com sent me some for a product review, which I’ll post sometime next week.  Good stuff.  Dang good stuff.

No Line on the Horizon is here!
Got it this morning at Wal-Mart.  I purchase the bulk of my music online, but some artists simply deserve more of an effort.  I’m about 3/4 of the way through the album now.  I’ll post a detailed review sometime in the future, but my initial thoughts may be boiled down to one line:

Tweet Tweet
Ok, so I caved and hopped on the Facebook bandwagon in December.  Last week I decided to check out Twitter.  I mock the cell phone texting phenomenon, which is how a lot of people do their twittering.  I still think texting is dumb (though the term “texting” may actually be dumber than the activity itself), and it annoys me when people text while driving or when their attention should be elsewhere.

But this Twitter thing is like blogging for the attention deficit.  So it’s Right up my alley!  Just FYI, though–  thus far my updates are infrequent (see my views on “texting” above) and fairly impersonal.  I think that’s a wise course of action.

Posted by bonnevillemariner on March 3, 2009 in Gear Reviews, Music, U2, Weekly Run-Down

Weekly Run-Down: The fusion of tech and nature, and imminent U2

Gmail is down- whatever will we do?
As of this writing, the globe has ceased to rotate.  Why?  Because Gmail, Google’s Web-based email service, is down.  I know what you’re thinking– what happened to the days when Internet hiccups were a common and expected phenomenon?   I remember when certain sites or services– erstwhile staples of the Web– would go down for hours, even days, without announcement or explanation.

The fact that the Gmail crash made Drudge is evidence of how far we’ve come and how dependent many of us are on technology.  As fond as I am of days gone by, my umbilical cord to World Wide Web, and Gmail in particular, is strong.  I keep a dedicated browser tab open for Gmail all day long at work, and I’ve got a direct, constant connection to it on my phone.

If I weren’t a skeptic, I’d swear I have some sort of weird psychic connection to Gmail as well.  Like people who wake up moments before their alarm clock goes off, sometimes I’ll unholster my phone and look at it just seconds before that magical buzz and blinking LED.    If you email me and I don’t get back to you within minutes, you can rest assured that I’m either dead or wandering in the wilderness (or at home with the family, which is a strictly enforced “tech-free” zone).

According to the UK’s Telegraph, Gmail’s crash left Internet users “baffled by the problems and at a loss as to what to do.”  I love it.  Completely bewildered.  I totally get it.  Good thing my brain is rooted well enough in real world that I can chuckle at this worldwide catastrophe.  But for now, for the Web-tethered masses, Earth’s rotation might as well be on indefinite hold.

OBS on Twitter
Speaking of tech, the Outdoor Bloggers Summit, of which I am a proud supporter, is now on Twitter.  Our founder, Kristine Shreve, has put a lot of work into building the community’s online infrastructure, and it’s come a long way.  If you’re an outdoors blogger or you follow the great outdoors online movement and you read the blog, check out our Twitter feed as well.

Imminent U2
The time is almost at hand for the release of new U2 album.  No Line on the Horizon is set for release in the U.S. on March 3.  I had mixed feelings about the album’s first single, “Get On Your Boots,” which is reminiscent of the band’s 1997 album Pop.  Pop is almost universally considered a colossal misstep in the band’s otherwise uber-successful career.

So I’m kinda hoping “Boots” isn’t representative of the entire album.  Luckily, I’m hearing it’s not.  This may be bad news for my friend Tyler, who ranks Pop among his personal favorites.  If you’re a fellow U2 fanatic, MusicRadar.com has posted a track-by-track description and review of the album.  Their take?  Not the band’s best offering by far, but a nice mix of experimentation and classic U2.

Posted by bonnevillemariner on February 24, 2009 in Music, Tech, U2, Weekly Run-Down