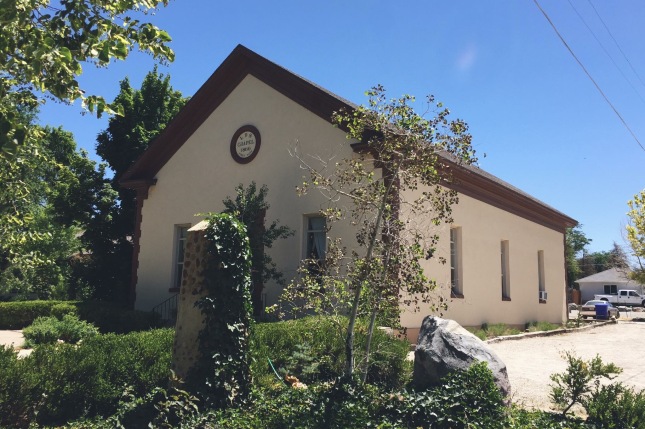 This piece originally appeared in the September 22, 2016 edition of the Tooele Transcript Bulletin.

“Are you going through?” Emily Johnson asked her friend, Rachael Anderson, as they perched atop a ladder in the historic Grantsville First Ward Meetinghouse last Saturday afternoon. Anderson aimed her flashlight through a small opening in the adobe wall, illuminating the vacuous attic beyond. The decision was a no-brainer, and with an animated “yep!” she disappeared through the dusty portal.

More than two decades have passed since the childhood friends first explored this attic and peered through tiny ductwork holes into the chapel below. The beam from Anderson’s light danced across the exposed rafters, scanning for the spot where they had signed their names in dust.

“It’s all still here, Em!” she called back, her voice trailing off as she tiptoed over ancient joists. “Just like I remember it.”

The friends had come to the old chapel at the corner of Clark and Cooley streets for a special open house celebrating the 150th anniversary of its dedication. The building’s current owners, Kelly and Macae Wanberg, said they couldn’t let the milestone pass without paying tribute to its legacy. Former Grantsville mayor Byron Anderson also attended the event, along with several other families with ties to the chapel. 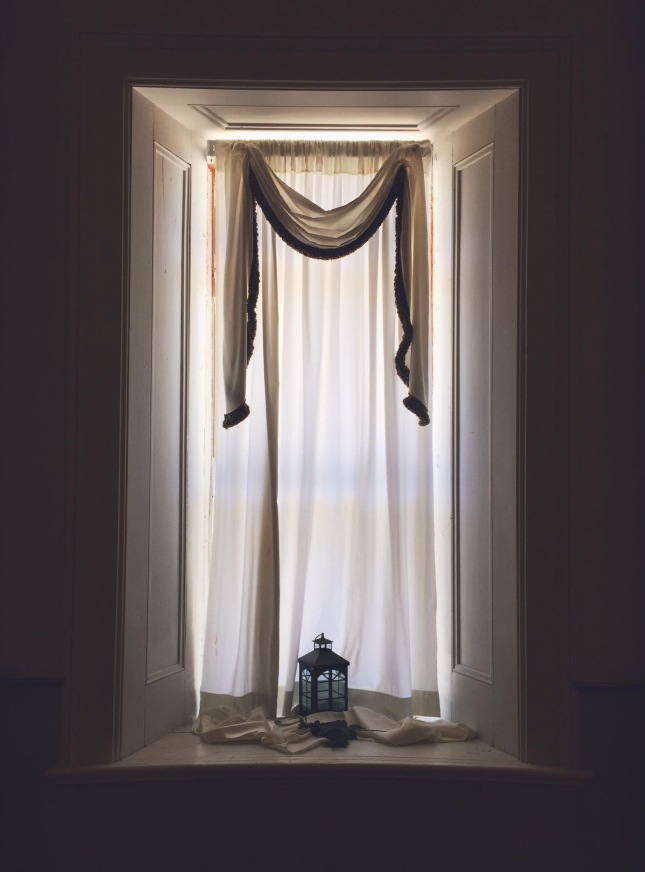 “Being here brings back good memories,” said Lanae Williams, who attended LDS services here beginning in the 1940s. She remembers delivering a talk or two from the pulpit. “The talks were something we all tried to avoid,” she laughed as she ran her fingers across the backrest of an old pew. “But I loved it here.”

Construction of the chapel probably began in the late 1850s, according to Craig Anderson of the Sons of the Utah Pioneers, Twenty Wells Chapter. Prior to its construction, church services were held in a primitive log hall southwest of the site on what is now Cooley Street. The building directly west of the chapel (now the Donner Reed Museum) was the original schoolhouse. These buildings were situated at the heart of the early settlement, which was surrounded by a wall made of adobe brick and mud for protection from Indian raids. The new meetinghouse would also be built within the walls of the fort.

The new church was built under the direction of Hugh Gillespie, an early Mormon pioneer who cut stone for the Salt Lake LDS Temple. Gillespie designed the Greek revival structure in the traditional style of early LDS buildings, with a gable roof and a vestry on the rear side. The chapel’s walls were over 2 feet thick and built with adobe bricks fashioned from mud and hay, then plastered over with stucco.

Inside, a pair of kerosene lamps hung from ornate rosettes in the ceiling. The lamps could be raised and lowered through the rosettes via framed pulley systems in the attic. Similar rosettes can be found in the Salt Lake Temple. 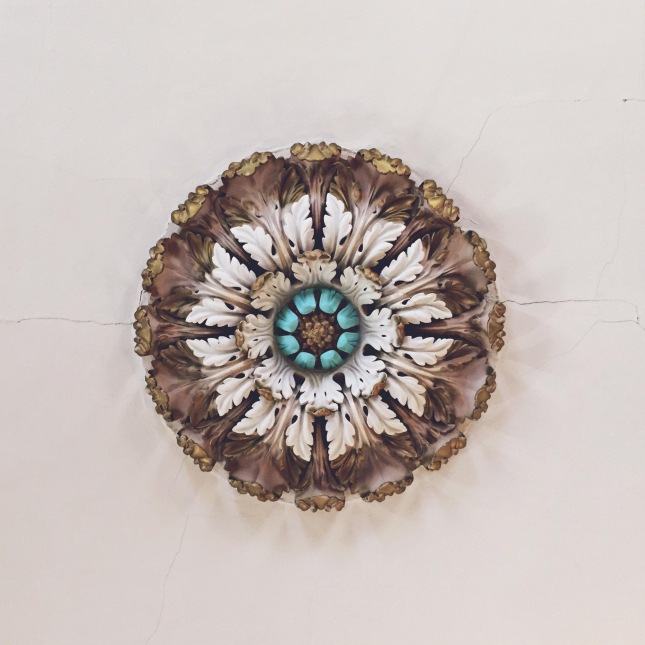 “It’s hard to believe this was all done without power tools,” said Kelly Wanberg. “Just old-fashioned tools with wrought iron nails to hold it all together. It’s really amazing.”

The meetinghouse was dedicated on July 14, 1866, with many LDS dignitaries in attendance. The beloved structure remained central to religious and social life in Grantsville as the community grew. The first major upgrade to the building came in 1952 with the addition of a wing of classrooms on its east side. The Grantsville Ward (now the Grantsville First Ward) called the chapel home until 1978 when it relocated to a modern facility.

The meetinghouse was then sold to Tate Mortuary for use in viewings and funeral services. It was listed on the National Register of Historic Places in 1982. The building holds the distinction of being one of the oldest continuously-used buildings in the region and one of the only LDS meetinghouses of the era still standing.

“Every Church president from Brigham Young to David O. McKay has given an address from this pulpit,” Anderson said. 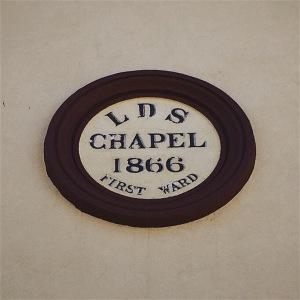 The church was then used as a residence — first for the Pectol, then Hamatake families. Anderson, the seventh of nine Pectol children, spoke nostalgically of her childhood spent in the old church.

“We all had classrooms for bedrooms,” she said. “We each had our own chalkboard!”

“The place was magical,” she said. “There is a sweet, peaceful feeling that has always been here through the years.”

By the time the Wanbergs purchased the chapel in 2011 with hopes of starting a theater and drama school, the building’s west wall had become dangerously unstable and threatened the entire structure.

“The wall was buckling,” Macae Wanberg said. “There had been a lot of damage from rain, and adobe doesn’t really do well when you mix it with water.”

The Wanbergs hired a contractor to shore up the wall with reinforced cinder block, then added interior pillars to prevent the ceiling from collapsing in the event of an earthquake. The renovated assembly hall, known now as the Old Grantsville Church, features a stage and an open floor. It bustles with drama students, theater audiences and wedding parties.

“When I was a child, I was a bit quiet around most people,” Macae Wanberg reflected. “I found that the stage was the one place I could really feel confident.”

She says her favorite part of theater is watching children who lack confidence or have disabilities stand in front of an audience and receive applause. The children’s theater side of the business recently finished its run of “Jack and the Giant,” and the dinner theater will present Rodgers and Hammerstein’s “The King and I” in October.

Saturday’s open house featured a historical presentation by Craig Anderson and performances of selected numbers by cast members of past and upcoming productions. Guests enjoyed cake while reminiscing about their experiences in the chapel.

For Anderson and Johnson, now in their early thirties, the memories came flooding back. They remembered pretending to be animals on the old rostrum ledges and jumping from the pulpit onto a trampoline that the family set up in the room. They remembered spooking their friends by stepping on a particularly creaky part of the floor.

Then they remembered their trek up to the attic and the signatures they left in the pioneer dust. And with that, they headed for the stairs. 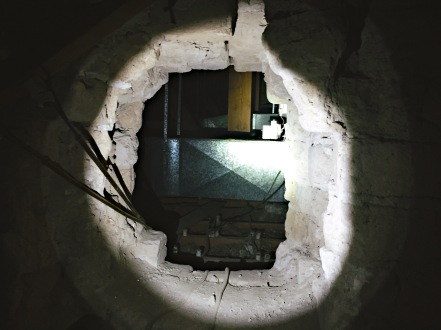 This small opening in the adobe wall of the Grantsville Ward meetinghouse opens into the chapel attic. Access is from the upper room of the rear vestry, which was added after the main building was completed in 1866. (photo: Clint Thomsen) 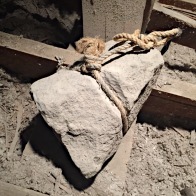 This boulder served as a counterweight to one of two kerosene lamps that hung from the ceiling of the Grantsville Ward meetinghouse, dedicated in 1866. (photo: Clint Thomsen)

This frame held the pulley system that lowered and raised one of two kerosene lamps in the Grantsville Ward meetinghouse, dedicated in 1866. (photo: Clint Thomsen) 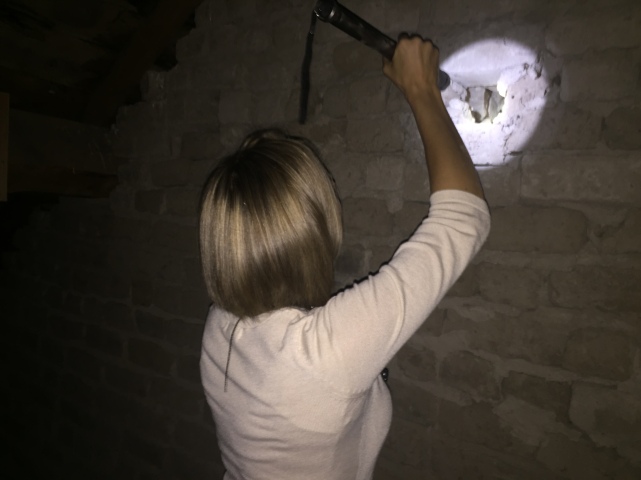 The search for their signatures was ultimately unsuccessful, but it afforded the friends a veritable trip back in time. They marveled by flashlight at the strands of hay and finger impressions still visible in the exposed adobe bricks. There was the hand-hewn truss system that still so ably supports the roof. There was the pulley rigging for the kerosene lamps, and the boulder that acted as a makeshift counterweight for them. It was as if the clock had stopped in 1866.

“This has made my day. My month. Possibly my whole year!” exclaimed Anderson.

The Wanbergs later joined the ladies in the attic. Although she had once looked inside, this was Macae Wanberg’s first time climbing through.

“We’re not originally from Grantsville,” Macae Wanberg said. “But we feel a part of it now. I guess we’re also a part of the history — and future — of this building. That’s been a great thing.”

Posted by bonnevillemariner on September 23, 2016 in History, Tooele Transcript Bulletin