I earned the Orienteering Merit Badge as a Boy Scout. I must have, because when all was said and done the circular patch with a compass on it was sewn there on my Boy Scout sash. But I’ll be honest—my memories of earning this badge are foggy at best, which means I probably phoned it in (counselors at Camp Maple Dell were notoriously lenient—especially with larger troops consisting mostly of annoying twelve year olds).

I say this because although I consider myself an avid outdoorsman, navigation has never been a strong point for me. Give me my GPS and I’m a regular Ferdinand Magellan, but I can hardly find my own car in the Wal-Mart parking lot without satellite assistance. Airdrop me into the West Desert without my smartphone and I’m doomed.

So what’s a navigationally-challenged outdoorsman to do? Is my dependence on modern gadgets short circuiting my intrinsic connection with nature? Is it really possible for me to find my way around this world using little more than my own senses?

English adventurer and author Tristan Gooley has the answers, and he explains everything in “The Natural Navigator: A Watchful Explorer’s Guide to a Nearly Forgotten Skill.”

“Natural navigation is one of the rarest arts on the planet,” writes Gooley in his introduction, lamenting the fact that modern culture has reduced the concept to a bag of tricks relegated to survival situations.

Though the veteran adventurer concedes that the ability to find one’s way using nature is not essential to everyday life, its practice is the key to communing with our surroundings and the philosophy behind it is as relevant as ever.

Thus, “The Natural Navigator” seeks foremost to prove that relevance. Though replete with information, tips and diagrams, this is not an exhaustive handbook. There are no bulleted lists or organized instructions. In fact, the book reads more like an informative yarn. Gooley forgoes a technical treatment of natural navigation skills, choosing instead to weave them almost lyrically—along with metaphors and historical factoids—into a larger philosophical framework.

It isn’t enough for Gooley to explain how to read the sun using a stick in the ground. To truly appreciate the method, one needs to know why it works, how it works, who used it for what, and when.

Gooley’s passion for the natural navigation is contagious. Frequent historical references are concise and relevant. His visually-oriented, layman’s approach to complex scientific processes of the earth and cosmos allows for seamless transitions to and from the various topics. Though some parts of the book seem overly philosophical, the narrative is an overall delight—a fitting ode to this all but forsaken art.

Has Gooley convinced me to leave the GPS at home the next time I head for the hills? Not quite yet—changing one’s navigational paradigm doesn’t happen overnight. But armed with the philosophical basics of natural navigation, my next outing will be extra rewarding.

For more information on the book and author Tristan Gooley, visit his website at www.naturalnavigator.com.

To read about my hapless attempt at orienteering, check out Orienteering provides old-school test of speed and smarts.

Posted by bonnevillemariner on February 22, 2011 in Reviews 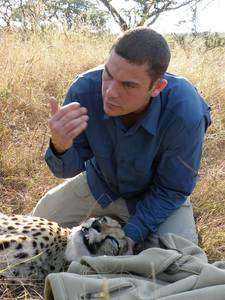 Animal Planet’s got an instant hit on their hands, right?

“This is not a stunt,” boasts the channel’s newest dandy before leaping from a plane 4,000 feet above some exotic locale.  “This is my job.”

The non-stunt strikes a familiar chord to regular Discovery network viewers.  No, this skydiving adventurer isn’t Bear Grylls, though the resemblance to the Man vs. Wild concept couldn’t seem more deliberate.

Our hero this time is herpetologist and self-described adrenaline junky Donald Schultz.  The show: Wild Recon, the latest in the network’s overkill lineup of danger-laced edu-tainment series.  The mission: to save the animals—and by extension, the humans who might benefit from the study of venom.  A noble goal.

Tearing his way through thick jungle undergrowth or clinging to rock ledges, Donald stops at nothing to complete his mission — getting viable bio-samples out of remote locations to research institutions or zoos – and it’s a race against the clock because the samples are so fragile. But before his precious cargo can be delivered, Donald will have to make it out alive.

Exciting, eh?  Maybe if  it been done, say, a decade ago.  Or if it had the slightest trace of originality.

Ultimately, Wild Recon comes off as a superficial rip-off of the Crocodile Hunter, Man vs. Wild, and Nickelodeon’s Go, Diego, Go.  It’s as if the producers couldn’t decide which format to adopt, so they tried to tackle them all.  Schultz seems like a truly cool guy, but he’s being shoved into niches that have already been filled by more genuine personalities.  (Except for Diego.  I hate Diego.)

Apparently, the only way for Schultz to get to his destinations is by jumping out of a plane.  Because how else can adventuring herpetologists get to these remote places?  Never mind that Schultz’s crew is waiting for him in the drop zone, having driven there in trucks full of equipment over pretty navigable roads.

Now that he’s made his grand entrance, Schultz can then drive solo to wherever the snakes are.  From there, it’s your typical Corwin-esque Animal Planet fare.   As the New York Times aptly puts it,

We learn assorted factoids that only a few of us are ever likely to use, like, “The best place to grab a kangaroo is by the tail.” We learn that many of Australia’s native species are in jeopardy because in the 1930s the cane toad, which secretes a toxin fatal to predators, was introduced from Hawaii as an ill-advised pest-control method.

What we don’t learn is why Mr. Schultz and those like him on other dangerous-animal shows have such an aversion to taking obvious precautions. If you were trying to grab a venomous lace monitor, a type of lizard, wouldn’t you put on gloves, or at least roll your shirt sleeves down? Someone cleaning a McDonald’s restroom wears more protective gear than this guy.

I’m not mocking Schultzy.  Dude’s obviously tough and well intended.  It’s just that in attempting to channel these other shows, Wild Recon becomes a parody of them.  These days, Discovery turns chaps like this out as quickly as Disney spawns its teen-aged tarts.

If Schultz wants to be remembered as anything but a Bear Grylls/Steve Irwin wannabe, we need to see what sets him apart from them, not how well he can imitate them.

Posted by bonnevillemariner on January 26, 2010 in Outdoor Adventure, Reviews, Skydiving