Ghosts in the desert? Past and paranormal meet in Old River Bed

The Old River Bed haunted?  Not likely.  But what were those strange rumbling sounds that seemed to echo through the prehistoric corridor?  Why were the hairs on my neck suddenly rising?  And who was behind the wheel of that truck that was slowly rolling through the brush toward me? 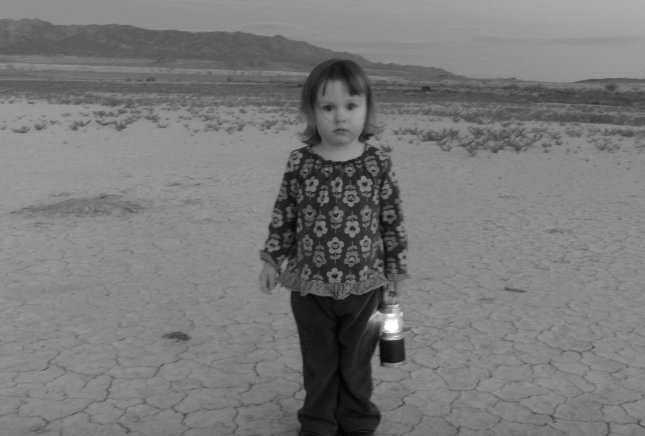 My daughter, Ella, stands in the middle of the Old River Bed along the Pony Express Trail in 2009 (photo: Clint Thomsen)

The following originally appeared in the October 29, 2009 edition of the Tooele Transcript Bulletin.

They said the Old River Bed was haunted.  They said that’s why stagecoach passengers were uneasy about stopping at the station there—especially overnight—and why Riverbed Station could never keep a manager for more than a few months at a time.  They were adamant.

I was skeptical.  Is the place mildly eerie?  Of course.  You’d be hard pressed to find a remote desert spot that isn’t.  But haunted?  No way.  “They” were delusional.  And I had driven 70 miles at dusk on the weekend before Halloween to prove it.  The mind has a tendency, when stifled by darkness, to tap imagination to fill the visual voids.  This must have been the case at the Old River Bed.  Yes, that was it.

Still, I couldn’t help but notice how unnervingly lonesome it was out there in the dark, with no cell phone reception, far from my car, at the bottom of a massive ancient river bed.  Haunted?  Not likely.  But what were those strange rumbling sounds that seemed to echo through the prehistoric corridor?  Why were the hairs on my neck suddenly rising?  And who was behind the wheel of that truck that was slowly rolling through the brush toward me?

Dropping abruptly below the desert plain eight miles west of Simpson Springs in southern Tooele County, the Old River Bed is a naturally vulnerable place.  It’s a naturally strange place, too: a clear-cut channel as broad as the Mississippi at its greatest width, in the middle of this dry no-man’s-land.  The ancient watercourse owes its existence to Lake Bonneville.

As Bonneville shrank, water in the Sevier Basin drained northward via a low channel into the Great Salt Lake Desert, carving a mile-wide, 100 foot deep gorge as it went.  This river flowed for roughly 3,000 years.  Evidence of early human activity has been discovered in its delta.

The Central Overland trail crossed the river bed in the 1850’s and served as a major transportation artery until 1869.  The famed but short-lived Pony Express used the road from 1860 to 1861.  Riverbed Station was almost certainly built in 1862—too late to serve the Pony Express.

Drivers and riders hated the Old River Bed because although it’s wide and deep, it’s completely hidden from view until you’re right on its lip.  Bandits or hostile Indians could easily ambush a rider as he popped into or out of the channel.

The constant fear of ambush aside, there was always the chance of flash flooding.  Major Howard Egan recorded one nail-biting event in his diary about a Pony Express rider who heard a heavy rushing sound upon entering the channel.  Realizing something was horribly wrong, the rider “put spurs to the pony” and narrowly escaped a fifteen foot wall of water that surged through the river bed and washed out the road.

This concrete post marks the old Riverbed stagecoach station site. Note that while the words “Pony Express” are etched into the concrete, Riverbed Station never served the Pony Express– it wasn’t built until 1962 (photo by Clint Thomsen).

One rightly questions the rationale of building a stagecoach station in the dead center of the Old River Bed.   Perhaps it eased the fear of ambush or made ground water more accessible.  The station is gone now; flash floods eventually washed its ruins away.  All that’s left are a concrete post marking the station site and a few scattered rocks that may have been part of a foundation.  A Civilian Conservation Corps monument stands nearby.

Station keepers could deal with the natural and human threats.  It was the paranormal that kept them awake at night.  They– the managers, stock tenders, the stage drivers and their passengers– swore the place was haunted, specifically by “desert fairies.”

Former station operators claimed the fairies were the ghosts of two young girls who fell from a wagon in the area and died.  No records of the deaths have ever been found.  There are no individual accounts, no well-documented haunting.  University of Utah professor David Jabusch spent the night there while researching the site in the early 1990’s.  Of the desert fairies he wrote, “During our overnight sojourn, while mapping the site, we were not visited.”

Yet the story still lives on in journals and lore.  And though I’m a skeptic, there’s something about being in the Old River Bed at night.  Is it haunted? It’s hard to say.  As I walked along the river bed I wondered about those deep rumbling sounds.  I was convincing myself they were thunder or aircraft from Dugway, when the pair of dim headlights on the road that I had been carefully watching paused beside my car.

Then they turned and started out toward me.  I knew they weren’t there for the monument.  The old Chevy passed it and pulled off the double track toward me.  A chill went up my spine.  What could I do but introduce myself?

Two men sat in the truck.  They reminded me of a hermit version of illusionist duo Penn and Teller.  The thin driver remained silent, letting his larger passenger do the talking.  “We saw your car, then we saw your light out there,” said Penn.  “We wondered what was up.”

It turns out the two live in the area—Penn in an old trailer and Teller on a nearby ranch.  Sometimes they drive around helping people change flat tires (the Old River Bed is a notorious flat-maker).  “You’re tires looked fine,” Penn assured me.

“I’m Clint, and I’m hunting ghosts,” I declared, a bit surprised at my own whimsy.  “Do you believe this place is haunted?”

“Of course it’s haunted,” Penn said.  “When I first moved out here I was scared to death.  I thought maybe monsters would come up on me at night and tear me apart.”

We chatted for a while before they turned and left me alone again in the Old River Bed.  I was relieved that my new friends weren’t madmen, but my enthusiasm about this place had given way to discordant unease.   I glanced once more down the blackened corridor, just to give the desert fairies one last chance to show.  Then I was more than ready to leave.

They said the Old River Bed is haunted.  Who am I to argue?