RSS
← Video: A quick trip to Stansbury Island
The Hams of Radio: Amateur radio operators harness the potential of radio →

Earlier this month I had the opportunity to travel to Florida to watch the final space shuttle launch.  The following are my reflections on the experience and the space program in general. 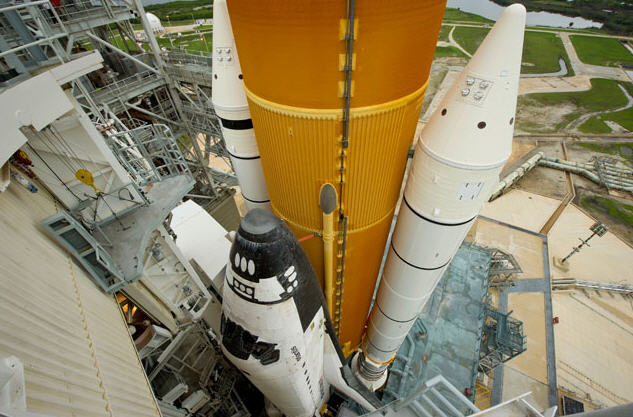 It’s 10:30 AM.  Or so– I’m not sure because not one of my thousand glances at my cell phone’s clock has actually registered in my head.  I blame the dizzying potpourri of emotions that overwhelm me at the moment—anxiety, guarded elation, sweeping nostalgia, sorrow—and a few more I can’t exactly pin down.  I play it cool, but my mind is racing.  I wish I had paid better attention to those high school lessons on weather radar echo.  I wish I would have brought my tripod.  I wish I hadn’t forgotten to eat the sausage McMuffin I picked up on the way here.  Mainly, though, like the million other people who have converged on Florida’s Space Coast this morning, I wish the sky would clear up.  At least for another hour or so.

Dad, Mom, and my young sons Boo and West sit with me along the narrow causeway that connects the Kennedy Space Center to Cape Canaveral across the Banana River.  Northward across the water, the Space Shuttle Atlantis launch stack towers over the installation’s legendary Launch Complex 39.  Atlantis is scheduled to launch at 11:26 AM, weather permitting.  This will be her final mission and the last of the shuttle program altogether.

“This is a big deal, guys,” I tell Boo, 10, and West, 8, confident that they’ll someday come to realize the magnitude of the event.

Communications between the shuttle and Launch Control echo from tall speaker posts that line the causeway.  I have no idea what they’re saying, but hearing it makes me feel informed.  A commentator chimes in occasionally to repeat the weather forecast, which hasn’t budged in three days: a 70% chance of unfavorable conditions at launch time.  The tragic irony of making a multi-day pilgrimage to the world’s space launch epicenter, only to watch it on TV in our living room later this weekend, does not escape me.  Were the launch scheduled for this moment, the commentator now adds, we’d be “no go” for launch.

Yet Atlantis stands dutifully, eagerly, in the distance as her four member crew finalizes launch preparations.  I can hear it in their voices; they’re pumped, assured, and ready for whatever the countdown brings.  As the minutes pass the boys and I take turns watching the launch stack through Dad’s binoculars.  I’m proud of Atlantis.  32 flights over 26 years of service—that’s a pretty good run.  I’m proud of her crerw, proud of the voices echoing from the speaker posts, proud of America.

Were I to classify my interest in space, I’d call it casual, yet enduring.  I’m no expert on the cosmos, but I’ve looked to them in awe for as long as I can remember.  As a kid, my favorite TV shows were invariably space-centric.  When I wasn’t sketching space ships, I was playing Asteroids on my Atari 2600 or scanning the night skies for satellites.  I watched space shuttle mission coverage whenever I had a chance.  And like many of my generation, I’ll never forget the horror of watching Space Shuttle Challenger explode on our elementary classroom TV.

Space was a dangerous place.  A dangerous, mind-boggling, wonderful place.

Though I haven’t fanatically followed the space shuttle program, its imminent end is jarring to me.  It’s not like the program’s retirement snuck up on me (it was mandated back in 2004).  But the announcement of its planned successor, the Constellation Program, made the shuttle’s retirement palatable.  Not only would Constellation continue to service the International Space Station, it would send astronauts back to the moon, then Mars and beyond.  For fans of manned spaceflight (and the contractors who would make it happen), the future looked exceptionally bright.

But President Obama’s abrupt cancellation of the program last year left little time for the space community and the American public to come to terms with what will amount to, at the very least, an extended hiatus from homegrown manned spaceflight.  We’ve abandoned an expensive, yet proven spacecraft without a viable replacement.  Once Atlantis returns to Earth on July 21, America’s manned space program will amount to little more than a bunch of abstract plans and concept art.

NASA insists that its future is still bright, and they’ve got a valid point.  There were the three successful Mars rover missions.  The IIS is bustling and several private companies are racing to develop spacecraft to service it.  Even as the clock ticks down to this morning’s launch, NASA’s Dawn probe is approaching the asteroid Vesta.  A week from now it will become the first spacecraft to enter orbit around an object in the main asteroid belt between Mars and Jupiter.  Exciting stuff, to be sure.

Still, there’s something to be said for human space exploration.  Space is the “final frontier” only because mankind has dared to explore it in person.   Any study of the cosmos—no matter how rote or scientific—says more about us than it does about our universe.  Take man out of space and you eliminate the most interesting aspect of space.  Robotic missions will never carry the symbolic force that manned missions have.  Hopefully somebody somewhere understands this.

These are the thoughts that filter through my mind as we wait for the next weather update.  Before it comes, the small slivers of blue in the sky suddenly widen and the outside temperature jumps emphatically.  The commentator is now “cautiously optimistic.”  Even he seems amazed at the turnaround.  The collective mood at the causeway is lifted.  By 11:00 Atlantis is unofficially “GO” for launch.  The crowd cheers.  The official call will be made at T minus 9 minutes.  All eyes are trained on the launch stack.  The excitement is as intense as the humidity.

T minus 9 minutes: Atlantis is officially “GO” for launch.  I’m starting to understand the audio from the speakers.  Boo and West are mesmerized.  The last minutes pass quickly.

T minus 10 seconds: The familiar voice begins final countdown.  The crowd counts along with him.  Atlantis ignites her main engines and the two solid boosters follow.  Atlantis lifts off, seemingly in slow motion, clearing the tower with a bright orange glare and a billowing wake.  She disappears into the upper layer of clouds before the thundering sounds of its launch finally reach the causeway.

From the loudspeakers: “The space shuttle spreads its wings one final time for the start of a sentimental journey into history.”

Within an hour the sky is again dark with pregnant clouds.  For all I know, this happens with every launch down here.  I’d like to think this morning is unique, that we’ve hit a fortuitous window of opportunity that closed almost as quickly as it opened.  There’s a metaphor somewhere in all of this, but I’m too stoked to flesh it out.  The boys sketch pictures of the launch on the bus ride back to Merritt Island.  I listen to the audio transmissions on my scanner until we’re out of range.  I close my cell phone’s weather app—it’ll be a while before I need it again.

Posted by bonnevillemariner on July 20, 2011 in Space

← Video: A quick trip to Stansbury Island
The Hams of Radio: Amateur radio operators harness the potential of radio →

One response to “Liftoff: Thoughts on the final space shuttle launch”