Boo and West are like child versions of TV naturalist Jeff Corwin and survivalist Les Stroud.  In many ways, my boys are complete opposites, but when it comes to adventuring theirs is the perfect alliance of wide-eyed idealism and practical grit.  Wilderness is one place their personalities converge.  And though they’ve only done it once before, they consider the 12 mile round-trip trek to South Willow Lake the ultimate wilderness adventure.

What a view! Boo and West stand atop a ridge above South Willow Lake in Tooele County last weekend

The following originally appeared in the September 23, 2010 edition of the Tooele Transcript Bulletin.

I didn’t want to jump into the lake. I really didn’t.  Not just because I find the idea of blindly submitting oneself to strange waters generally disturbing—or that my last encounter with this lake resulted in a bloody foot laceration.

No, it was much simpler than that.  Truth is, South Willow Lake is cold.  Freeze-your-tuckus-off cold.  No matter how long you’ve been hiking or how parched you are when you reach the lake, a dip in South Willow will always be several shrill notches past refreshing.

So what compelled this wary father to take the plunge?  Only the resolute declaration of his 7 year old son: “I’ll do it if you do, Dad.”

The internal debate ended there.  West and I waded out, counted to three, and dove in.

“I think you’re both nuts,” said 9 year old Boo as we climbed back to shore.  He was crouching intently over a puddle at the lake’s south end.   “Check this out,” he called, unwittingly stealing our thunder.  “This has got to be the weirdest bug I’ve ever seen!”

Boo and West are like child versions of TV naturalist Jeff Corwin and survivalist Les Stroud.  In many ways, my boys are complete opposites, but when it comes to adventuring theirs is the perfect alliance of wide-eyed idealism and practical grit.  Wilderness is one place their personalities converge.  And though they’ve only done it once before, they consider the 12 mile round-trip trek to South Willow Lake the ultimate wilderness adventure.

By strict geographical standards, the lake is small and rather unremarkable.  But like most alpine lakes, South Willow’s beauty is defined by its surroundings.  The lake is partially encircled by tall limber pines.  It lies at the foot of a sheer 10,685 foot glacial cirque in the heart of the Deseret Peak Wilderness.  Aesthetically, South Willow Lake is the crown jewel of the Stansbury Mountains. 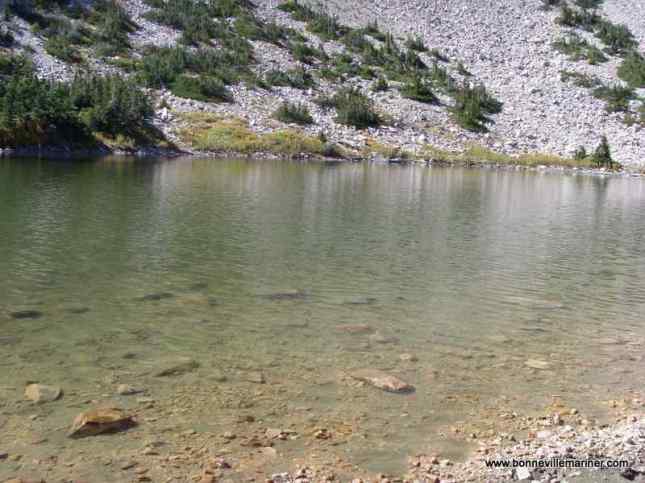 Judging by various online trip reports, most people reach the lake by following the Mill Fork Trail from Loop Campground in South Willow Canyon.  Last year we took the more direct route from the Medina Flat Trail Head further down the canyon.  This route follows the Stansbury Front Trail to its junction with historic Mining Fork Road, which leads to the wilderness boundary and a final trail to the lake.  This is the steeper of the two options, but it covers more varied terrain and offers striking views.  We decided to take it again this year.

Most trail literature list a 6.8-7 mile round trip distance for the Mining Fork route.  I was skeptical of those numbers after last year’s hike, so I decided to measure it myself this time.  Using a GPS mapping app on my smartphone, I would record our entire track.

We began hiking late in the morning under clear skies and an uncommonly hot sun.  Boo took the lead and set the pace.  It’s his usual role, and he does it well.  The boys had resolved to carry their own gear the whole way.  A clear departure from the norm, it was yet another reminder to me that they’re growing up fast.  I hung behind and to listen to their trail banter.  Among other priceless tidbits, I learned that West is the best basketball player at recess and that Boo is now just as flexible in P.E. as his toddlerhood friend, McCall, who, amazingly enough, becomes less and less icky as time passes.

“Me and her are getting along a little better these days,” he said.

By the time we reached Mining Fork, I regretted packing our jackets.  This is my favorite section of the hike.  The narrow road is believed to have been built during World War II.  It traces the canyon bottom at a steady grade beneath a thick canopy of fir and spruce, passing the remains of collapsed mining cabins along the way.  At times, this road has certain aura that I’d describe as eerie, but that I’ve never been able to pin down.

The road eventually opens into a stand of aspens and a single track trail picks up at the wilderness boundary.  The cirque, which is unofficially referred to as South Willow Peak, looms constantly from this point.   At its foot, the lake is surrounded by a ridge; it isn’t visible until you’re standing on its shores.

The stretch from the wilderness boundary to the lake measured 2.4 miles with a 1,555 foot elevation gain.  It’s the steepest leg of the hike.  We rested often on this stretch, but stops were short—the boys were eager to reach the lake.  When we rounded the last ridge, they tossed their backpacks and waded in.  I checked my phone.  We had hiked 5.8 miles—nearly two miles further than the listed distance.

West and I didn’t swim long.  There was no need to loiter in the frigid depths.  After a letting out the requisite victory howls, we moved onto the very important tasks of drinking warm Gatorade, eating smashed peanut butter sandwiches, and watching Boo’s weird bug drag lines in the mud.  Later, I taught them how to skip rocks.

With evening coming, Boo gazed up at South Willow Peak.  “We need to climb that sometime,” he said.  “I bet it’s cool up there.”

We reluctantly packed for the return trek.  Our legs were sore.  It was a sweet sore, the kind of sore you get from a good, long hike.  The boys were hesitant to leave, as they always are when it’s time.  Nothing’s better than hanging out lakeside after a hike, and nothing’s worse than the prospect of leaving.  In my mind, the end of this hike marked the end of summer.  Yellowing leaves on surrounding trees reinforced that notion.

I reset my GPS app.  When we arrived back at the trail head, the readings matched up—5.8 miles with a 3,364 foot cumulative elevation gain.

“How deep do you think that lake is?” West wondered on the way home.

“I don’t know, but I think I’ll try swimming next time,” Boo answered.

I think they’re both nuts.