<<Scroll down for updates>>

16 year old solo sailor Abby Sunderland is alive and well. Sunderland’s 40 foot boat, Wild Eyes, has been sighted by a Qantas Airways jetliner that had flown to her broadcast location in the southern Indian Ocean. The boat is upright, but its mast has been broken off.

The jet established radio contact with Sunderland and determined that she is in good health and with plenty of food.  She will await rescue by a French fishing vessel that should arrive at her location by about midnight tonight (Mountain).  Late last night, Sunderland’s parents– who have hopefully learned a few lessons here– posted the following on her blog:

We have just heard from the Australian Search and Rescue. The plane arrived on the scene moments ago. Wild Eyes is upright but her rigging is down. The weather conditions are abating. Radio communication was made and Abby reports that she is fine!

We don’t know much else right now. The French fishing vessel that was diverted to her location will be there in a little over 24 hours. Where they will take her or how long it will take we don’t know.

Sunderland set sail in January from Marina Del Rey, California, in an attempt to circumnavigate the globe.  She was just past her halfway mark when she activated her distress beacons.  For more background on this drama, check out yesterday’s post.

UPDATE 06/11 3:30pm: Sunderland’s parents have posted a photo of Wild Eyes taken by the spotter crew aboard the Qantas jet: 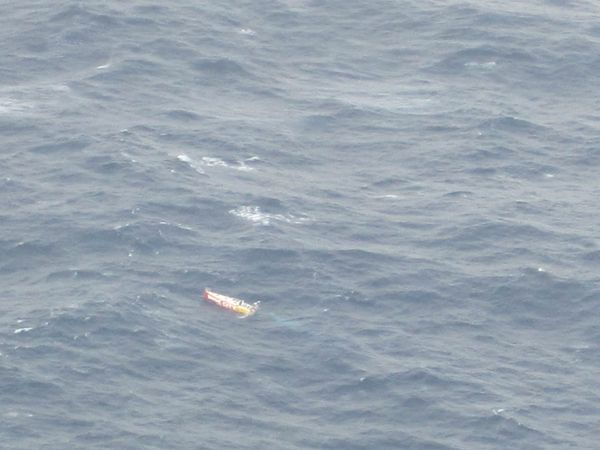 The L.A. Times has further details about the spot:

When the crew did make that radio contact with Sunderland, her first words to them were, “This is Abby.”

“The window of opportunity to speak to her was very short, so we had very brief, direct conversations about her health, the condition of the vessel, and her communications,” he continued. “The seas are very rough indeed, and there is a lot of wind, and she is obviously going to have a very uncomfortable night of sleep.”

The crew said Sunderland was in good spirits.  They instructed her to activate two more beacons for redundant location broadcasts. The more, the merrier, I suppose!

UPDATE 06/12: French fishing vessel Ile de la Reunion reached Abby Sunderland’s location at about 2:45 am local time and rescued her from battered Wild Eyes. Multiple sources report that the fishing boat’s captain went overboard during the turbulent rescue, and was himself rescued by the crew. Ile de la Reunion is transporting Sunderland to Reunion Island, sometime after which she’ll make her way home to California. Wild Eyes is still adrift, though the family is now soliciting donations to recover the boat. My take: leave the boat– raise money to repay Qantas and the French fishing crew. Abby Sunderland seems mature beyond her years. Her parents, however, need to grow up.

A few hours after the rescue, Abby Sunderland posted to her blog, defending her decision to sail around the world alone.

There are plenty of things people can think of to blame for my situation; my age, the time of year and many more. The truth is, I was in a storm and you don’t sail through the Indian Ocean without getting in at least one storm. It wasn’t the time of year it was just a Southern Ocean storm. Storms are part of the deal when you set out to sail around the world.

Posted by bonnevillemariner on June 11, 2010 in Outdoor News